The Romanian Chamber Orchestra under the direction of Cristian Macelaru will tour Europe in December 2021.

The Romanian Chamber Orchestra is a soul project for the members of the ensemble, a point of reference for Romanian culture and a musical ambassador of the Southeast European country. 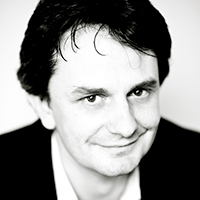 The Romanian Chamber Orchestra is a passion project for the members of the ensemble, a reference point for Romanian culture and a musical ambassador for the south-eastern European country.

The artistic directors of the orchestra are violinist Alexandru Tomescu and violist Ladislau Cristian Andriș. Cristian Măcelaru, currently the world's most renowned Romanian conductor, chief conductor of the WDR Symphony Orchestra in Cologne and, since September 2020, the new music director of the Orchestre National de France, is the conductor of the Romanian Chamber Orchestra, which was founded in 2019.

The ensemble pairs exceptional Romanian musicians who perform in some of the leading orchestras in Europe with musicians from the most important orchestras in Romania. Being a passion project, the members of the orchestra cooperate within the ensemble to offer the public a unique musical experience.

The versatility of the orchestra can be observed in the interpretation of the repertoire that includes extremely demanding works, while the sonority of the ensemble is a refined one, specific to chamber music.

In 2020 the Romanian Chamber Orchestra was the first orchestra in Romania and one of the first in Europe to switch to digital sheet music and media.

The sound of the valuable instruments, built by renowned violin makers, such as Antonio Stradivarius, Jean Baptiste Vuillaume, Nicolò Gagliano, Carlo Antonio Testore, Giovanni Grancino, Charles Boullangier and Gustav Bernardel, not only inspire the musicians of the Romanian Chamber Orchestra, but also enchant their audience too.

Currently in his second season as Chief Conductor of the WDR Sinfonieorchester, Cristian Măcelaru is one of the fast-rising stars of the conducting world. Appointed Music Director of the Orchestre National de France in Paris starting with September 2021, one of Europe’s leading orchestras, he actually started this position a year earlier, effectively on September 1, 2020.

In January 2020, Măcelaru received his first-ever GRAMMY® Award for conducting the Decca Classics recording of Wynton Marsalis’ Violin Concerto with Nicola Benedetti and the Philadelphia Orchestra.

Summer 2020 will commence Măcelaru’s first season as Inaugural Artistic Director and Principal Conductor of the World Youth Symphony Orchestra at Interlochen Center for the Arts. It will also mark his Fourth season as Music Director and Conductor of the Cabrillo Festival of Contemporary Music, the world’s leading festival dedicated to contemporary symphonic repertoire. He leads premiere-filled programs of new works by an esteemed group of composers. Among the 2020 season’s highlights are a dozen composers-in-residence including Sean Shepherd who premieres a new work for the Festival.

Cristian Măcelaru attracted international attention for the first time in 2012, when he stepped into the breach with the Chicago Symphony Orchestra, deputizing for Pierre Boulez. In the same year, he received the “Solti Emerging Conductor Award” for young conductors, a prestigious honor only awarded once before in the Foundation’s history, followed in 2014 by the “Solti Conducting Award”. Since then, he has performed regularly at the podium of the best American orchestras, including the Chicago Symphony Orchestra, New York Philharmonic, Los Angeles Philharmonic, Cleveland Orchestra, St. Louis Symphony and National Symphony Orchestra. A particularly close collaboration connects him with the Philadelphia Orchestra: Since his subscription debut in 2013, he has been on the podium of this orchestra over 150 times and served there for three seasons as Conductor-in-Residence. Prior to that, he was their Associate Conductor for two seasons and previously Assistant Conductor for one season from September 2011. He continues a close relationship with the orchestra in leading them on annual subscription programs and other special concerts.

Cristian Măcelaru made his Carnegie Hall debut in February 2015 on a program with the Danish National Symphony Orchestra and Anne-Sophie Mutter. A keen opera conductor, in June 2015 he led the Cincinnati Opera in highly acclaimed performances of Il Trovatore. In 2010, he made his operatic debut with the Houston Grand Opera in Madama Butterfly and led the U.S. premiere of Colin Matthews’s Turning Point with the Tanglewood Music Center Orchestra as part of the Tanglewood Contemporary Music Festival. In 2019, he returns to the Houston Grand Opera on a Kasper Holten production of Don Giovanni.

Cristian Măcelaru was born in Timișoara, Romania and comes from a musical family. As the youngest of ten children, he received instrumental lessons at an early age — like all his siblings — in his case on the violin. His studies took him from Romania to the Interlochen Arts Academy in Michigan, University of Miami in Florida and Rice University in Houston, where he studied conducting with Larry Rachleff. He then deepened his knowledge in Tanglewood Music Center and Aspen Music Festival in masterclasses with David Zinman, Rafael Frühbeck de Burgos, Oliver Knussen and Stefan Asbury.

Măcelaru was the youngest concertmaster in the history of the Miami Symphony Orchestra and made his Carnegie Hall debut with that orchestra at the age of 19. He also played in the first violin section of the Houston Symphony for two seasons.

He resides in Bonn with his wife Cheryl and children Beniamin and Maria.

aRomanian born British pianist and creator of “The Nutcracker and I”, Alexandra Dariescu dazzles audiences and critics worldwide with her effortless musicality and captivating stage presence. Her vision and innovative approach to programming makes her stand out as a creative entrepreneur who likes to think differently.

In the 20/21 season Dariescu makes her debut with the Oslo Philharmonic and Houston Symphony Orchestra/Fabien Gabel and Uppsala Chamber Orchestra/Rebecca Miller. Dariescu also looks forward to her recital tour in the UK and Germany at venues such as the Milton Court Concert Hall in London. After successful performances at the Wiener Staatsoper, BOZAR Brussels, Barbican London and Staatsoper Berlin, Dariescu continues her collaboration with Angela Gheorghiu and the duo will perform in Santa Monica in spring 2021.

Nominated for an OPUS Klassik 2019, The Nutcracker and I, by Alexandra Dariescu is a ground-breaking multimedia performance for piano solo with dance and digital animation. It was premiered at Barbican’s Milton Court in December 2017, and has since then enjoyed international acclaim on tour across Europe, Australia, China, the Emirates and the US with more than 75 performances in venues such as the Wiener Konzerthaus, Laeiszhalle Hamburg, Philharmonie Luxembourg, Auditorium de Lyon, Verbier Festival, Konserthuset Gothenburg, King’s Place London, Melbourne Recital Hall, Sydney City Recital Hall, Shanghai Grand Theatre, Dubai Opera House and Las Vegas Summerlin Library. In the 20/21 season Dariescu looks forward to bringing the Nutcracker to Konzerthaus Berlin for a weeklong residency as well as the Zaubersee Festival Lucerne. Also celebrated is Dariescu’s audio book of the same name on the Signum label, with the story written by Jessica Duchen and narrated by celebrated children TV presenter and BAFTA winner Lindsey Russell.

Dariescu’s latest release of her Decca recording with Angela Gheorghiu in November 2019 adds to her discography, including her Trilogy of Preludes on Champs Hill Records with complete preludes by Boulanger/Messiaen/Faure, Chopin/Dutilleux and Shostakovich/Szymanowski. Also in her discography are recordings of Tchaikovsky’s piano concerto No. 1 with the Royal Philharmonic Orchestra/Darrell Ang (Signum Records) and “Mesmerism” (NMC Records), which is a concerto written especially for Dariescu by award-winning British composer Emily Howard.

Alexandra has been mentored by Sir András Schiff and Imogen Cooper. After graduating from the Royal Northern College of Music with the Gold Medal, where she studied with Nelson Goerner, Alexander Melnikov, Mark Ray and Dina Parakhina, Alexandra pursued her Masters at the Guildhall School of Music and Drama with Ronan O’Hora. A former artist of the Young Classical Artists Trust (YCAT), Alexandra was a Laureate at the Verbier Festival Academy and received the UK’s Women of the Future Award in the Arts and Culture category. In 2017 Alexandra was appointed patron of Music in Lyddington, Cultural Ambassador of Romania and Honorary Associate Artist of the Royal Northern College of Music. In spring 2018, Alexandra received the “Officer of the Romanian Crown” from the Royal Family and was selected as a Young European Leader by Friends of Europe.